I promised myself that I would add one of these stories here every time I told one. I tell them at one point or another throughout the summer. There will be no chronology - not yet anyway - nor will there be much of a schedule. You never know; I might add a story every day and I might not. This is my life. Every day is an adventure.

Just the other morning I was treated to quite a romance - a moosey romance. I've lived out here for over twenty years and I've heard their love-lorn calls and seen signs of the males scratching the velvet off their racks, but never have I had the opportunity to watch such an interaction. Frequently, on Facebook, there are pictures posted showing one species of animal getting along, if not 'loving' another species of animal. There are even more showing affection between couples or mother and offspring. Though I enjoy these pictures immensely, they are generally quite cute, watching the real thing play out takes the cake.

As I said before, I've heard them calling. A moose's voice is small for their size. They sound like a calf and quiet at that, but the sound carries oddly enough. The female will wail her call, sounding lonely and needy. As we were all learning this call in order to lure a moose in close to shoot, my young sons were the best, if you ask me. My oldest son even succeeded in luring a bull in to only feet away from where he hid. Sadly, he was not armed with anything big enough to take down a bull. Ever since then, I would tease him saying he was so good because he was love-lorn and lonely too.

The bull's call is more of a grunt, coming in a series of three or four at a time, most of the time. Using this call, the hunter might be able to lure another bull around. One bull is always interested in keeping his territory clear of other bulls so there is no competition for the ladies that might be there.

I've also heard the bulls fighting, something I've only seen in some videos once in a while. Though the fight is nothing like what we may all be most familiar with, big horn sheep squaring off and butting each other with tremendous force. Bull moose do this too but their clash carries on into something of an arm wrestling match before they back off and go at it again. I've heard of bulls actually becoming entangled and unable to disengage. Their only hope is to drop their racks before they starve to death. It's a toss up which comes first since bulls will go off their feed in order to woo the ladies. The sound of those fights, though, is astonishing. Picture if you will, a couple Herculean (or bigger) fighters going at each other, but instead of them wielding swords, they swing 2x6s at each other. The resounding whap sound echos through the trees like a gun shot.

What took place in my yard was diminutive compared to all that. There was no other bull to up the drama. There was only two young moose feeling the romance. It's difficult to determine a female's age, but the older a male gets, the bigger his rack gets. This young Romeo had a fairly small rack; I guess he's maybe three or four years old, but he was a really handsome dude. He was a rich chocolate brown with long white stockings. The Juliet, I haven't a clue, but the way she danced and played, she was no old mama. She was the more gray/brown color looking sun-bleached across her back. Both were healthy with good muscle and a generous layer of fat to see them through the winter.

Romeo might have been young enough to not quite know what to do, or maybe it's just early enough in the season that his urge wasn't strong enough, but they would rub noses and talk to each other, then she would dance away and he would find a bush to scratch his velvety antlers on. Sometimes he would test the air in her direction and she would dance again. She was being really quite coy, always coming back to him if he lagged behind. They rubbed noses frequently, and they talked openly, neither of them trying to attract any other attention beyond their little game. More than once Romeo would sidle up beside Juliet, but she would dance away, teasing terribly. Like most guys I know, Romeo would amble after her asking what he'd done wrong now. She'd giggle and come back around, offering a little nooky before dancing off again. The play went on for most of an hour here in my yard, but then they tootled off out of sight. Will this pair end up being the parents of a little kicker next spring? It's hard to tell. Seldom will such a young bull get his way with a lady.

I Have a Dream 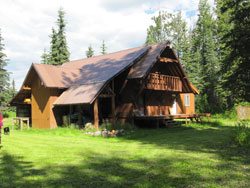 A couple months ago, I learned that a small place upriver was for sale. Not much land but that's okay - I'm not a farmer, nor do I raise any livestock. Once upon a time, when we first moved out here, a friend of mine lived there, but when her husband died, she wasn't up to living out here by herself. It's not easy living out here, even with a man around, but alone and far from young, I wasn't surprised when she moved down to the lower 48 to be closer to her kids, I believe.

In the interim, at first, another not-so-close friend moved in there to take care of the place, and soon a new building was going up farther back from the river. Thus was the beginning of a small lodge. I stopped in to visit once, but really, I so seldom go in that direction, I kinda lost touch with the place and the happenings there.

At one point, this not-so-close friend was asked to leave, she was a terrible alcoholic so I assumed that was why. I think she was supposed to be running a business there but I couldn't say for sure. I never heard about the place since then. It was there, was all I knew.

The person who told me about the place, told me quite a few things. Apparently the local carpenter lived there for a while too. What all he did there I don't know, but somewhere along the line, the place gained a fuel barn, a sauna, a couple guest cabins and a gazebo. More recently, I think the first new building grew and was remodeled inside. I was able to peek in the window and what I saw was way different from when I made that one visit.

When I finally found the listing at the realtor's and saw that the price was under $300,000, I nearly fell over. The location plus the set-up, not to mention the very nice look, should have called for a much higher price. This I might be able to work out. I immediately sent them an email asking if negotiations were possible.

I had such ideas. Paramount being some sort of writer's retreat, but certainly open to any other options. I asked one of the fishing guides where I work if he thought fly fishing lessons would draw people. With salmon fishing seemingly questionable, I figured I wouldn't lean on that industry exclusively. The place was listed as a bed and breakfast and built to be run year round; I would make the most of that. I planned to offer internet access, and get a big screen TV for guests to watch sports (not that I'm any kind of a sports fan, but many people are). I also figured there would be certain kinds of meals on certain days of the week. Home made pizza on Fridays, for instance. Steak night. Fried Chicken night. Spaghetti night. Barbeque night. and others as I thought of them.

With the place being an unknown on the river and never having been advertised as anything, there was no established clientele, but as with all new things, word would get around, I was sure, and I fully intended to advertise everywhere I could think of.

I ran all this past the owner with the realtor as intermediary since the owner didn't do emails, offering to run the place on his okay and pay him for it a certain agreeable % of quarterly profits. My first glimmer of hope was his being willing to take a down payment. So would he work with me on the rest? Would he take my offer? He wanted me to get fire insurance; something I admit to not having thought of, but it was a good idea. To protect us both.

But now my hopes have been hit with a bucket of cold water. He wants monthly payments. Not that the payments were outrageous, quite the contrary, they were very reasonable. The trouble is, there is anywhere from four to eight months out of a year when there would be NO income. Where is the money for those payments supposed to come from then? Not to mention the simple problem of mailing a check. You see, the reason there would be no business during those months is because travel on the river is impossible during those months. That is the times when the river is either starting to freeze up and before the ice is thick enough to travel on, or when the ice is getting soft and breaking up and before it's safe to travel by boat. No one goes anywhere during those times.

So, that's where it stands at the moment; nothing I can do at the moment anyway. I've asked my family for help, but it doesn't look like they can help much. Maybe some other avenue will open up, or maybe the owner will see the light and understand that my offer is reasonable. One can hope.

Stumble it for me, will you

Welcome to ANNA OF ALASKA

Enjoy some true tales from my life in the wilderness of Alaska. Ask questions - that's the best way to generate the next post.

If you would like to know a little more about some of the stories I've written, there are some synopses on my website http://AnnaLWalls.weebly.com - Come on over and learn about my Passion. Feel free to ask me about those stories that don't happen to be there.

My Obsession is all things writing. I've written two dozen books ranging in length from 6 pages to over 1100 pages. I'll post a different sample each week as the mood pulls me. Kinda depends on which character wants to show off at the time. But keep an eye pealed - once in a while there's something else entirely.

This is how I plan my garden

Magic, Spaceships and Romance - With a Little Trouble Mixed In

Promote Your Page Too