I promised myself that I would add one of these stories here every time I told one. I tell them at one point or another throughout the summer. There will be no chronology - not yet anyway - nor will there be much of a schedule. You never know; I might add a story every day and I might not. This is my life. Every day is an adventure. 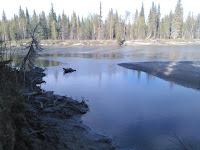 Be ware of rant - sorry.

In an earlier post this last winter, I complained about the lack of snow. I mean, this is Alaska. We're SUPPOSED to have tons and tons of snow every winter. When we first moved out here, it was common to truly avoid stepping off the packed trail unless you had snowshoes. If you stepped off the trail and went in only to waist deep or so, it was considered a low snow year, but still no great cause for worry.

Then Vice President Al Gore, apparently a fierce environmentalist, came to power in 1993, and it suddenly became all the rage to clean up the world. I followed this - kinda - there was really no avoiding it, and to a certain degree, I agreed with the concept. It's only right to take care of our world; it's the only one we have. I do my very best to make sure my little piece of it does not collect so much as cigarette butts.

But then clean-up evolved from global cooling in the 70s to global warming scare it is today. But since I see no sign of coastal cities preparing for those drowning years, I have always had my doubts. And since my life is so weather-dependent, I do try to keep up as much as possible.

Then Obama came to visit our state back in August of '15. Of course it was all over the news, and in reality I was really ashamed of our president. To be seen standing with two girls, he and both girls holding up fish, but he using thick rubber gloves? That is not a picture to make me proud. The man is a wimp. I don't have much respect for him, but that's not the issue of this post. Then in September of that year, he was on the Bear Grylls survival show where his greatest risk was to drink a little glacier water. I mean, it was almost an insult to the show. The point of the show was to discuss how badly the glaciers were receding. That show, and every other documentary I have ever watched to date involving either the glaciers receding or the polar icecap breaking up, failed miserably to convince me that there was an issue.

To me, the issue with the ice cap can be directly blamed on the fleet of ice breakers they use to keep the shipping lanes open. And glaciers - well, they come and go with the season just like they are supposed to do. Now, don't get me wrong, some glaciers aren't doing so well, but all things change. No. The trouble with the glaciers, and by weather-related connection, the ice cap, is directly related to precipitation coming down as snow. As long as there was enough snow, the glaciers would do just fine.

But those seeking to further the global warming/global change issues can't have status quo when it comes to snowfall in Alaska. That would not further their drowning of coastal cities agenda. I believe Obama managed to accomplish two things during his visit. One was to somehow force Alaska to sign up for his health care farce - we had been holding out until his visit. Another was to look into the glacier issue.

He was not gone from this state for even a week when jets started flying over in force, and they were flying over in a grid - a very obvious square criss-cross pattern. I drive to work in a boat. the sky is wide open to me. I saw this with my very own eyes. The next day or two, and more or less from then on, the air stank.

Now cloud seeding has been around for years. They started trying to modify the weather down in the mid-west way back in the 60s, and they wanted to enhance snowfall in the Rockies too, all in an attempt to replenish the reservoir under the whole nation. Rivers were drying up, and nearly all the farms now used sprinklers to water their crops. The whole country was drying up. Was it working? I don't think so, but what do I know.

What they did up here - with such stinking concentration seemed to do one thing. We had a nasty flood that fall - the worst I've seen for over twenty years. The damage to the area was extensive, but we recovered. We washed the river mud out of our building and we repaired the damage, and we carried on. That winter we still had about 2 or 3 feet of snow here, but other damage had been done too. For the first time in a while, the Iditarod Sled Dog Race was forced to start in Fairbanks due to lack of snow. It's happened in the past - no biggie. Life goes on. So what if several businesses, who'd spent thousands of $$$ to get ready for the big race, lost out on all that income. My life is not the only life that revolves around the weather. For that race to start in Fairbanks two years in a row, due to lack of snow, is unprecedented. Those weather-control dudes had to have been having a field day, celebrating with champagne and caviar.

Thanks to stinky air all through the summer last year, we here on the river were blessed with not just one flood, but four. Lodges were forced to ship guests to town and some closed early. At the lodge where I work, my boss remained open, but he was calling guests right and left, telling them of the issue and offering to rebook them for next year - their trip had already been paid for so it was covered. Again, mega loss of business, but the global climate 'change' was paramount. They simply had to starve those glaciers until they went away.

Now, thanks to all their efforts, and more to the point of this post, I should have been able to go to work on the 15th. Take a look at those pictures. See all that sand and where the water is? All that sand should be under water by now, or at least very close to it. Spring melt off almost always causes a near flood to start with - it makes launching the boats easier. This year, even after the ice in the rivers had gone away, there was not enough water to even float a boat, let alone go anywhere, and here it is, very nearly a week later, and I'm waiting for the water to come up. Don't get me wrong, it was coming up a couple inches a day until day before yesterday when it rained. I was lazy that day; I didn't go check the river in the rain. I went yesterday instead. Much to my dismay, the water went down a couple inches. Now, to add to my dismay, last night it frosted. Frost here tells me the mountains are still frozen. At this point that is my only source of river water.

I can see making it rain on dry farmers, but the agenda here is purely political and it makes me want to shoot someone. I am so angry about this, and I feel so impotent.

Stumble it for me, will you

Welcome to ANNA OF ALASKA

Enjoy some true tales from my life in the wilderness of Alaska. Ask questions - that's the best way to generate the next post.

If you would like to know a little more about some of the stories I've written, there are some synopses on my website http://AnnaLWalls.weebly.com - Come on over and learn about my Passion. Feel free to ask me about those stories that don't happen to be there.

My Obsession is all things writing. I've written two dozen books ranging in length from 6 pages to over 1100 pages. I'll post a different sample each week as the mood pulls me. Kinda depends on which character wants to show off at the time. But keep an eye pealed - once in a while there's something else entirely.

This is how I plan my garden

Magic, Spaceships and Romance - With a Little Trouble Mixed In

Promote Your Page Too